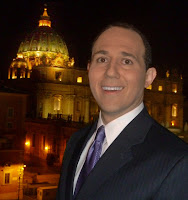 A cold, damp wind whips through the borgos surrounding the Vatican these days. And they bring ill tidings. Yesterday, the one source of first-hand information about the General Congregation of Cardinals (the private Pre-Conclave show happening behind the Vatican walls) was abruptly cut off. Each afternoon the American Cardinals had been holding a press avail featuring two members of their group. And though no major news was made here, it gave the press and the Cardinals a chance to engage and interact during a confusing time for all. Can anyone say “new evangelization”? Apparently the candor and the “parallel” press briefings were too much for some to bear, so they had to go.

Father Federico Lombardi, the spokesman for the Holy See Press Office obliquely ruminated on the gag order (but then everything in Rome is oblique):

“The College of Cardinals as a whole has decided to maintain a line of an increasing degree of reserve,” he said. When pressed on the reasons for ending the American press conferences he shot back, “Ask them.”

Two factors influenced the move within the Congregation to silence the mouthy Americans.

One: transcript-like, detailed accounts of the Cardinal’s official meetings have been appearing in the Italian papers. Some Cardinals groused about the leaks. I am told by a source that Cardinal Angelo Sodano, the Dean of the College running the meetings, personally announced the names of the offending “leakers” before the entire body. I find this hard to believe. Cardinals won’t name names when grave offenses have occurred out of fear of offending a brother Cardinal. Now an old Vatican hand like Sodano is going to publically humiliate multiple, Italian Cardinal electors on the eve of a Conclave? I think not. Unless he hoped to demonstrate that he could be the Curial reformer that so many are now seeking… Whatever the case, the leaks provided a nice justification for muzzling the American Cardinals. Even though the Americans had nothing to do with the leaks.

Two: The Americans Cardinals and their “American media” have become a source of envy over the last few days. Since the U.S. Cardinals were the only game in town, aside from the rather staid official Holy See Press Conference, the 5000 plus journalists here swarmed the North American College each afternoon. Cardinals from other countries and certainly the Curia did not look kindly on what Father Lombari called the “parallel” daily press briefings being run out of the NAC. The feeling among the Curia--and I have heard it repeatedly on the desolate streets of this town--is that the Americans were dominating the media coverage and therefore shaping the Conclave. This is only partly true. They were dominating the coverage because no one else was saying anything quotable. Every Cardinal had the freedom to speak to the media. The fact that some are media adverse or unsure of themselves should not be held against those who are demonstrably not. Rather than viewing the daily US media briefing as a negative, the Curia should have embraced it as a positive—a chance for the Church to respond and to get her message out. Instead they have created a media vacuum, one that the Curia imagines it can fill. The scant procedural information provided by Father Lombari and the Press Office (approved by Cardinal Sodano) will not satiate the hordes of media covering this Conclave. Be fully prepared to hear more cries that the press is “distorting” and “manipulating” the Conclave through its coverage. Left with little information, the press will seek out sources and groups that will further irritate Church officials. But it is a situation they could have avoided by making Cardinals—American or otherwise-- more available.

Behind the scenes there is a quiet cold war taking shape among the Cardinals. This division does not seem to be along the old right/left lines, but rather between the Curialists and the outsiders. Reform of the Roman Curia, the bureaucracy of the Church, is a major priority for most of the Cardinal electors I have spoken with since the Pope announced his retirement. It is that curia which is to blame for so many of the gaffes, missteps, and scandals that besieged Pope Benedict during his eight year reign. But the old guard will not go quietly.

The Italians have had a good long time to talk amongst themselves, select their candidates for Pope, and strengthen their coalition. Not so with the Cardinals from other countries, some of whom have only been in Rome for a few days. This is why so many electors (particularly those from America) from +Dolan to +George have urged a longer pre-Conclave period. They want more time to vet their peers, consider the issues facing the Church, and form their own coalitions. Don’t believe the media mem on this one. The later the Conclave, the less influence the Italians will have. The sooner the Conclave, the more influence the Italians will wield. There seems to be a consensus that a later Conclave is what is needed. Time will tell.

Update from today’s press conference: All the Cardinals have arrived and checked into the General Congregation. The last holdout, the Cardinal of Ho Chi Min City is expected to attend this evening’s Congregation meeting. There is still no Conclave date set.

I have decided, despite the limitations of time due to broadcast preps and interviews here to take up the diary started by my friend Father Richard John Neuhaus in 2005. During that Conclave, surrounded by the smoke of his favorite cigars, Father Neuhaus pounded out a daily diary in between our coverage. In his memory, and as a way of granting you access to the hidden side of this process, I have elected to follow his lead. I hope you enjoy this and be sure to send your reactions or questions to Raymond@raymondarroyo.com. You can also sign up for the diary via my website at raymondarroyo.com.

In the meantime, remember to catch the World Over and our Live From The Vatican daily show on EWTN throughout the interregnum.
Posted by Raymond Arroyo at 5:10 AM