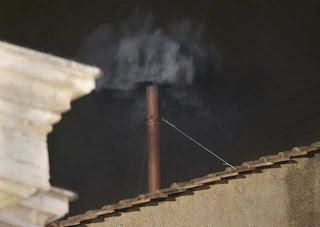 So it begins. The Cardinals celebrated Mass for the election of a new Pope in the great Basilica as thunder broke overhead. Cardinal Angelo Sodano, the dean of Cardinals delivered a homily that stressed unity. It was not the stunning, earth shaker of a sermon delivered by Cardinal Ratzinger eight years ago and had none of the quotable “dictatorship of relativism” lines. But there was also no papal funeral…and Sodano is too old to vote in the conclave.

Cardinal Dolan is hoping a Pope will be selected by Thursday according to a letter to his priests. I hope he is right. If there is white smoke on Wednesday, Cardinal Angelo Scola of Milan could well be the Pope. If the election rolls on until Thursday and Friday, it is anyone’s guess. Another American Cardinal told me he believes we could see a Pope by Friday. The longer a conclave, the harder it will be to even remotely forecast the result. Some believe this conclave could stretch into next week.

After a hailstorm, it was ferociously cold out on the terrace for the live coverage of the Procession of the Cardinals into the Sistine Chapel this afternoon. What a splendid event the start of the Conclave was. Our conclave team did a magnificent job not only identifying the cardinals, but giving impromptu personal insights. If you didn’t see it, watch the Youtube edition. I’ll post it on my Twitter and Facebook pages. It really was objectively among the finest and most insightful coverage of any network.

The cardinals looked grave and occupied with weighty thoughts as they placed their hands on the open Bible, swearing oaths at the start of the conclave. The time for fun is over. Soon the renaissance pressure cooker that is the conclave will bear down on these men; alliances will shift, sure candidates will fail, and the unexpected could well happen before this is over. Until then, we will all be watching the chimney atop the Sistine Chapel twice a day and doing little else. The fact that millions of eyes, Catholic or not, are fascinated by the drama of this election is testament to the enduring power of the papacy and its continuing importance in today’s world. What other faith commands this kind of attention when selecting a leader?

As expected the smoke that emerged from the Sistine Chapel chimney was deep, dark black. I am told they have fans in the flue which creates not a stream of smoke, but a cloud. The crowd in St. Peter's groaned when they saw the plume. It was exactly what I expected. The first vote is the chance for the cardinals to get a true sense of where the election is and to gauge the strength of candidates. Since the results of each round of voting is announced, the electors can see twice in the morning and twice at night how the body is shifting and which candidates are viable. It is a remarkable process and an election like no other.

Ran into my New Orleans pals Mary Matalin and Msgr. Chris Nalty this afternoon on the street while I was doing a radio interview. The two of them were so elegantly attired, they could have easily stepped out of one of those Nick and Nora movies from the 1940’s. All they needed was Asta the dog. I love everybody, but New Orleanians are a people set apart in my heart. You can take the boy out of New Orleans…

Spotted Kathryn Lopez of National Review in one of the borgos near the hotel. She has been encountering all sorts of difficulties. This morning K-Lo went to the Holy See Press Office to secure a temporary credential. Without so much as a hello, a staffer looked at her and like the Papal Master of Ceremonies at the Conclave yelled, “Get out!” Oh well. Hopefully they whispered it in the polite, delicate way that Monsignor Guido Marini announced “extra omnes!” (everyone out) in the Sistine Chapel today.

The Conclave Team and I will be back on air Thursday for The World Over in our normal time slot: 8PM eastern on EWTN. I’ll have analysis and possibly inside knowledge on the new Pope (if we have one). Remember to send your reactions or questions to Raymond@raymondarroyo.com. You can also sign up for my e-blast (it’s near the bottom of my homepage at Raymondarroyo.com). If you sign up for the e-blast, I’ll send you the latest installment of my Rome Diary each day. You wouldn't want to miss that, would you? Buona Sera.
Posted by Raymond Arroyo at 6:45 PM