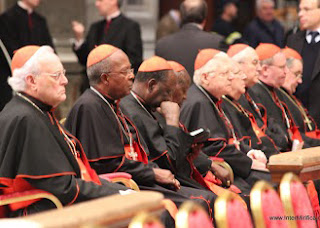 These are damp, strangely quiet days in Rome. They lack the drama and the massive show of humanity that accompanied the 2005 passing of John Paul the Second, which will inevitably impact the result of this Conclave. I can remember those emotional days eight years ago—days when it felt as if the whole Church might collapse into tears. I can remember fighting to get to our broadcast location on many mornings due to the crush of young people packing the streets leading to the Vatican. It seemed the whole world had come to bid a personal farewell to John Paul the Great (as Fr. Neuhaus would call him)—and indeed they had.

On the last day of the public viewing of John Paul’s body I recall being overcome by sadness. He was the only Pope I could remember, the Pope of my childhood and my adulthood. Kneeling next to his body, which seemed so much smaller than I remembered, tears spilled into my hands. It was hardly a unique reaction in the grand basilica that day, but it still felt as if a piece of my heart had been taken from me. Having known the Pope personally over many years only added to my sense of grief—and I was not alone.

The spectacle of that mourning period--the crowds flowing into St. Peter’s at all hours, the singing in the streets, the impromptu doorway confessions up and down the Via Della Conciliazione--pulled everyone into its sway.

Lacking the soulful centrifugal force of a Pope’s passing, the lead up to the Conclave of 2013 pivoted directly to the vetting of candidates and forming of alliances. There was the Cardinals momentary public vespers service at St. Peter’s on March 6th which provided an important spiritual image for the Cardinals. As my co-host on our coverage, Father Gerald Murray opined, “It is a powerful symbol to see powerful men on their knees in prayer.” Indeed. But it was a prayerful moment that did not extend much beyond St. Peter’s. And even though Catholics around the world were joining them in that moment, the Cardinals could not see the faithful as they could in 2005. The presence of those people praying in the streets and the powerful funeral Mass for JPII prepared the Cardinals for that Conclave.

The Curia, the Vatican government in Rome, is clearly the focus of many discussions among the Cardinals these days. It was even confirmed at a press conference today.
The decision to silence the Cardinals (especially the US Cardinals daily presser) was the suggestion of Curial officials running the General Congregation meetings. There was no vote about whether the Cardinals should speak to the media or not. Instead the Holy See spokesman, Fr. Lombardi reported, “it seemed to reflect the will of the College.”

Apart from the daily press conference, the only official releases from the Vatican came in the form of tweets from the Holy See Secretariat of State. They were meant to coincide with the “regular session of the Human Rights Council.” The Secretary of Relations with States tweeted:

Archbishop Mamberti: The Holy See, in its diplomatic activity, is commited (sic) to the protection of the rights of the most vulnerable

The Holy See’s representative to the UN in Geneva then sent out:

Archbishop Tomasi: Respect for the religious freedom of minorities is the cornerstone of dialogue and cooperation.

This is the type of off key approach that has confused the media, bewildered the people, and infuriated the Cardinals. The Curia just doesn’t seem to get it. At a time when people are craving news on the Conclave, the bureaucracy is issuing diplomatic deep thoughts (and misspelled ones at that). These odd releases and gag orders could weigh on the minds of the Cardinals once they enter the Sistine Chapel.

The Cardinals seem to want a reformer; an outsider with insider knowledge who can “streamline” and “clean out” the corruption that ails the Vatican bureaucracy here in Rome. As one man with intimate knowledge of the Curia confided to me today, “When you deal with the Curia it is like putting your hand in a sack with two snakes and an eel-- and you have to pull out the eel.” Get the picture?

Beyond a reformer, Cardinals tell me they’d like to see a charismatic Pope who will boldly proclaim the Gospel in this challenging age. Benedict’s resignation provided yet another requirement for the job: the man must be robust and young enough to meet the expectations of the modern papacy. There is a presumption that the Pope must drag himself about the world as a personal emblem of the Faith a la’ John Paul the Second. But why? For centuries Popes only rarely left the Vatican. And with the advance of media and technology, the Pope need only be a click or an app away from his flock at any moment. In spite of the oft mentioned qualities that the dream candidate must possess, there is a one big problem. The man has yet to present himself.

In all of my conversations here, it is striking that no leading candidate has emerged. In 2005, though many in the media missed it, some of us knew that Cardinal Ratzinger was the man to beat. This time the field seems wide open and confusion reigns. Aside from Cardinals Ouellet, Scola, and O’Malley, few names rise in conversations. But I refuse to engage in needless speculation. Soon we will all know the Cardinals decision. The Congregation of Cardinals voted this afternoon to set the date for the Conclave. It will begin on Tuesday, March 12th. I will be covering the Procession of the Cardinals into the Sistine Chapel on that first afternoon and I hope you will join us.

Be sure to tune in each afternoon for “Live from Vatican with Raymond Arroyo” airing at 2PM Eastern and 9PM Eastern on EWTN.

Be sure to send your reactions or questions to raymond@raymondarroyo.com. You can also sign up for my e-blast (it’s near the bottom of my homepage at www.raymondarroyo.com). If you sign up for the e-blast, I’ll send you the latest installment of my Rome Diary each day. Ciao
Posted by Raymond Arroyo at 6:33 AM