There was something mildly amusing, yesterday, about watching hundreds of journalists giddily traipse up to the Sistine Chapel for their big news get of the day: a glimpse of two stoves! To be fair, the Sistine Chapel is always a wonder. But when it is packed with smart phone toting journalists and camera people (many of whom have never been here before) the shine comes off even Michelangelo’s masterpiece pretty fast. For some of the visiting journalists it was a chance a snap a shot for the Twitter feed, for others, a pleasant way to pass to the time. With so little news to report on an otherwise sleepy Saturday, why not?

As I have written before, the real news of the Conclave occurs during the unofficial pre-conclave meetings: during dinners, long walks, and chats between cardinals or groups of cardinals. The near universal distress over the state of the curia (the Vatican government that is to assist the Holy Father fulfill his evangelical mission in the Church) comes up in nearly every conversation I have had here. I will not divulge the contents of my private talks with various electors, but recent statements in the media will give you some sense of what I have been hearing.

“The Curia must be revolutionized,” German Cardinal Walter Kasper told La Repubblica recently. “As well as the word reform, there must be a second: transparency.”

Americans have been no less outspoken on the curia. Before the curtain fell on the US cardinals daily briefing, Cardinal Daniel DiNardo, the Archbishop of Galveston-Houston said, “I think that we need to look attentively at the work of the Curia in recent years.” DiNardo’s point was that the curia badly needs reform.

Again and again this theme of curial reform has also been a mainstay conversation piece at the official General Congregation meetings. Expect the cardinals going into Conclave to have “curial reformer” at the top of their papal wish lists.

John Allen speculates in a blog today that the curial block could be more powerful in 2013 than it was in 2005 since they now represent a third of the papal electors (up from less than a quarter). Those 38 cardinals are not likely to vote as a bloc. But if they did, Allen speculates, “a candidate would have to pick up absolutely every other vote in the conclave to get to 77 (the necessary votes needed to win the papacy).” Scary that. But it is not likely to happen. Though I could foresee a sizable Italian contingent collaborating with a curial faction that could block candidates. We shall see…

Our Conclave Crew: Fr. Gerry Murray, Fr. Roger Landry, Robert Royal, Chris Edwards and I ran into Fr. Robert Sirico and Sam Gregg of the Acton Institute last night. It seems everyone is making plans to attend a Mass celebrated by a different cardinal at their titular church in Rome today. One is going to a church on the outskirts or Rome to attend Cardinal George Pell’s Mass, another is going to Cardinal Francis George’s Mass on an island in the Tiber River. I was planning to drop into a local parish. But since everyone seems intent on being at a high profile Mass, I decided to attend Cardinal Marc Ouellet’s. Don’t read too much into this. His titular church is 3 minutes from my hotel and is actually the local parish I had initially thought about dropping into anyway. Providence is kind at times. 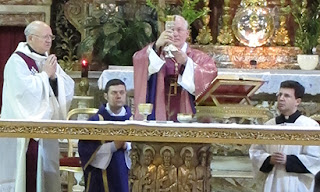 Cardinal Marc Ouellet's morning Mass did not happen, but he did celebrate the six thirty Mass in his titular church of Santa Maria in Traspontina.  Before a congregation of largely media types, the Cardinal pronounced his homily in flawless Italian.  His concentration did not waver even as a small child ran back and forth not far from the altar during the consecration.  Supreme Knight of the Knights of Columbus Carl Anderson was in attendance as well as a smatterings of locals.

Cardinal Dolan apparently wowed the crowds at his Roman titular church across town this morning. He offered his four minute homily in functional Italian—seen by many as a sign of his ability to connect with the Romans. The assembled burst into rapturous applause at his conclusion. As one reporter put it to me, “It’s the closest thing to New Hampshire you’re likely to see in Rome.” This is what journalists abroad with little to cover do: chase after Cardinals as they enter and leave Masses at their titular churches. How newsworthy is all this? Not very. But it keeps everybody busy and provides pictures for the evening news back home.

I ran into my pal George Weigel and his wingman on MSNBC this week, Father Robert Barron on the Borgo Pio. It was a joy to converse with people here who are actually informed. They seemed, like other friends I’ve encountered this week, cautious about predictions and uncertain of the outcome.

We had a bracing Live From The Vatican show last night which ran through the major Papabili candidates—cardinals who are “popeable.” These are the names we are hearing in our conversations with Cardinals around town and it is possible that one of these impressive men could well be the next Pope. If you missed it, you should watch the Youtube edition. I’ll post it on my Facebook and Twitter pages as soon as it becomes available. We will be introducing you to other cardinals in the days ahead.

After a sunny afternoon, an evening drizzle has begun to fall in Rome and there are still no leading papal candidates. According to those who will do the electing, the man who would be pope still eludes them. And the Conclave is only a little more than 24 hours away.

Be sure to tune in each afternoon for “Live from Vatican with Raymond Arroyo” airing at 2PM Eastern and 9PM Eastern on EWTN. And send your reactions or questions to raymond@raymondarroyo.com You can also sign up for my e-blast (it’s near the bottom of my homepage at raymondarroyo.com). If you sign up for the e-blast, I’ll send the latest installment of my Rome Diary each day. Ciao.
Posted by Raymond Arroyo at 12:57 PM