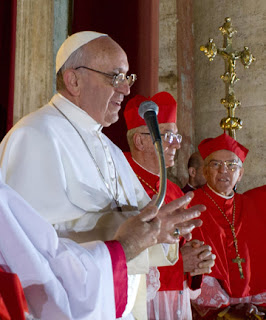 I was in St. Peter’s Square after the white smoke billowed out of the Sistine Chapel this evening.  To be among the people, even in the rain, was quite an experience.  There were more twisted ankles on the cobblestones of Rome tonight than in any moment over the last eight years.  Hordes of Italians came rushing into the great Piazza to be a part of this historic moment.  Who would the new Pope be?

The word going in was that an early vote would mean Pope Scola.  So much for the prognostications and even the preconceptions of some Cardinals entering the conclave.  As I have often said: the pressure cooker of the conclave dispatches and raises up candidates very quickly--and in real time. According to a 2005 diary leaked to the news media, Cardinal Jorge Maria Bergoglio was the runner up in the last conclave.  Tonight he was no runner up.  He was elected Pope.

In truth, from the ground level, I have never heard a crowd so quiet at a papal event.  The Pope’s tender “Buona Sera” threw the people and he was not who they were expecting.  +Dolan, +Scola, +Ouellet were still mentioned before the big reveal.  Most in the crowd near me, didn’t know who Cardinal Bergoglio was, even after the election.

By now you know many of the details. He is the first Jesuit pope, the first to take the name Francis.  And by all indications he intends to follow the Divine request entrusted to Francis of Assisi: “Rebuild my Church.”  (Cardinal Dolan said tonight that the Pope emphatically told the cardinals that he would take the name Francis after Francis of Assisi, not Francis Xavier the Jesuit evangelist).

Having spoken to a number of people who know Pope Bergoglio here is what I have discerned: He is a man of the people.  A humble Archbishop who lives in an apartment and takes a bus to work.  The new Pope is known to have a heart for the poor.  He has repeatedly spoken about the inequities between rich and poor and stressed social justice.  Doctrinally he is right in line with Benedict XVI on marriage, abortion, etc.

You’ll remember when the cardinals went into the conclave they insisted that they were seeking a reformer to clean up the curia--the Vatican bureaucracy.  Well I am told by an individual who worked with Cardinal Bergoglio in the past that he is the man for the job.  “He is an ___-kicker who can fix this place from top to bottom,” the man told me tonight. “He’ll get the right people in place.”  As a Jesuit leader in Argentina, he battled his order to restrain the rise of liberation theology and tried to reform the Jesuits from within.  So the notion of reform and standing up to status quo is nothing new for Bergoglio.

When I watched the Pope appear on the Loggia tonight, I was most excited for Latins throughout the Americas.  You’ll remember I wrote a couple of days ago: “…The Latin American (cardinals) only have 14 votes in the conclave even though they represent 46% of Catholics worldwide.  They want the Holy See to give Latin America it's due and seek a Pope who really cares.  The Latin swing vote could be decisive.”  I think it probably was.  Expect the red hats to proliferate in South and Central America.  Imagine the reception Pope Francis will receive this summer in Brazil.  Better make your hotel reservations now—there may be none available a few weeks from now.

Welcome to the era of Francis.  Tomorrow the Pope will visit with Benedict XVI, pray at St. Mary Major, and celebrate a 5PM Mass at the Sistine Chapel with his cardinals.  The inauguration Mass is on Tuesday, St. Joseph’s day.

The new Pope has a tender way about him.  From the Loggia of St. Peter’s he asked the crowd to bless him, led them in prayers for the former Pope, and after taking the mic from the attendant, reached out to the people with very gentle words.  Cardinal Dolan said instead of riding in the limo to the post-election dinner, Pope Francis jumped in a mini-bus with his brother cardinals.  Humility is an arresting thing to see in the powerful.  And to see a Pope purposely diminishing his profile at the very moment of his ascension is an example for all of us.  Like John Paul and Benedict before him, the office and the power of the Holy Spirit will transform Pope Francis into something he is not, even now.

Standing in the rain watching the people stream out of the square tonight, even as the Pope was speaking, it felt like something major was ending and perhaps something even better was beginning.  Only time will tell.  But that hushed crowd seemed to be withholding its excitement. tempering its applause, waiting to see just what Pope Francis will do and say in the days to come.  Many Catholics probably feel the same way.

The Conclave Team and I will be back on air Thursday for the World Over in our normal time slot: 8PM eastern on EWTN.  I’ll will have analysis of the new Pope, exclusive interviews and we will answer all your questions.  Remember to send your reactions or questions to  Raymond@raymondarroyo.com.  You can also sign up for my e-blast (it’s near the bottom of my homepage at Raymondarroyo.com).  If you sign up for the e-blast, I’ll send you the latest installment of my Rome Diary each day.  You wouldn't want to miss that, would you?  Buona Sera.
Posted by Raymond Arroyo at 7:34 PM