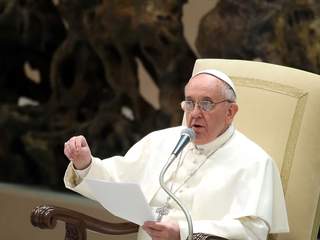 Pope Francis charmed the daylights out of the press corps this morning and made some real news. Thousands of journalists packed into the Paul VI Hall for the 11 AM meeting. A burst of applause rang out the moment Pope Francis strode onto the stage. We even got a bit of news: The Pope explained how and why he chose the name ‘Francis.’ In an easy style, waving a hand in the air, he recounted the story off text:

“During the election, I was seated next to the Archbishop Emeritus of São Paolo and Prefect Emeritus of the Congregation for the Clergy, Cardinal Claudio Hummes: a good friend, a good friend! When things were looking dangerous, he encouraged me. And when the votes reached two thirds, there was the usual applause, because the Pope had been elected. And he gave me a hug and a kiss, and said: “Don't forget the poor!” And those words came to me: the poor, the poor. Then, right away, thinking of the poor, I thought of Francis of Assisi. Then I thought of all the wars, as the votes were still being counted, till the end. Francis is also the man of peace. That is how the name came into my heart: Francis of Assisi. For me, he is the man of poverty, the man of peace, the man who loves and protects creation; these days we do not have a very good relationship with creation, do we? He is the man who gives us this spirit of peace, the poor man … How I would like a Church which is poor and for the poor! Afterwards, people were joking with me. “But you should call yourself Hadrian, because Hadrian VI was the reformer, we need a reform…” And someone else said to me: “No, no: your name should be Clement”. “But why?” “Clement XV: thus you pay back Clement XIV who suppressed the Society of Jesus!” These were jokes.”

Some Jesuits listening might have missed the humor. The reference to Cardinal Hummes was an interesting one. There are rumors that the Pope may name the 78-year-old retired Hummes Secretary of State. Given his age, I find that story difficult to swallow. But who foresaw a Jesuit, older Pope from Latin America? We’ll see how this plays out. Here’s what we do know: on Saturday the Pope reappointed the entire curia to their former positions. Now the all important replacement process begins.

There was one moment at the end of the audience which caused a number of journalists confusion. The Pope said he was going to give the assembled his blessing. Then he announced this in Spanish: “I told you I was cordially imparting my blessing. Since many of you are not members of the Catholic Church, and others are not believers, I cordially give this blessing silently, to each of you, respecting the conscience of each, but in the knowledge that each of you is a child of God. May God bless you!”
With that he waved and left the audience hall. On our way out a non-Catholic, American TV anchor asked me, “Did he give the blessing? Was that it?” The Pope did not raise his hand to make the sign of the cross, which caused much confusion. Few of us had ever witnessed a silent papal blessing, but I guess we did today. At a media event it seemed a missed opportunity. Gesture is important not only in the Church but in the media. And while the Pope’s sensitivity was well taken, by not making a gesture of blessing he denied the press a great image to accompany their stories—mainly that the Pope had blessed the media.

The coming days will be important ones for Pope Francis. Monday he will sit down with the President of Argentina with whom he has crossed swords for years. As Cardinal Archbishop of Buenos Aires he opposed President Christina Fernandez’s efforts to legalize gay marriage and distribute free contraceptives. Now in his first diplomatic meeting, he will sit across the table from Fernandez as Pope. For Madame Presidente it will likely be an uncomfortable encounter. It’s one thing to defy an archbishop. Openly defying a pope, in person, requires a political fortitude that is hard to come by.

Tomorrow the Pope will celebrate Mass at the Vatican’s parish church of Santa Anna. It is an interesting choice. My suspicion is that the Pope is again underscoring--as he did with the visit to the image of Mary, Salvation of the Roman People the other day, and while standing on the loggia of St. Peter’s—that he is the bishop of Rome. It is a facet of the papacy that Francis seems to take seriously and one that is perhaps easier for him to embrace during these early days. In some ways it is like an Archbishop changing dioceses. But in time, he will no doubt confront the full scope of his awesome responsibility as Supreme Pastor-- nothing less than the care and direction of the global Catholic Church.

The major networks have all but pulled out of Rome. Following Pope Francis’ election the story was over for them. They will give cursory coverage to the inaugural Mass on Tuesday and that will be that. The most important work in these early days will take place out of public sight—in his meetings with curial officials and trusted advisors.

I am actually looking forward to seeing images of the face to face between Benedict XVI and Pope Francis next Saturday at Castelgondolfo. Ah to be a papal fly on the wall… What must Benedict think of all this? Of the new Pope? Of the new arrangement? This will be one for the history books… stay tuned.

I’ll be going to Mass with Cardinal Timothy Dolan in the morning and I will be praying particularly for my first born who will be 13 on St. Patrick’s day. Happy Birthday Alexander. I’ll be home soon.

Remember that you can sign up for my e-blast (it’s near the bottom of my homepage at Raymondarroyo.com). Once you sign up, I’ll send you the latest installment of my Rome Diary each day.