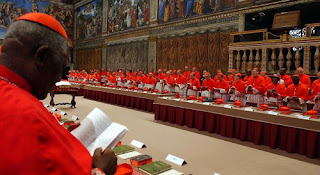 The Italian press is rife with stories of vote counts and blocks of Cardinals already committed to various papal candidates. This is the sort of thing Italian papers do; engage in wild speculation to excite their audience. The fact is nobody outside of the men going in to the Sistine Chapel really know who the major candidates will be or what the first vote count will reveal. That first vote, tomorrow night, is all important.

After their opening Mass and a dramatic procession into the Sistina tomorrow afternoon, the cardinals will one by one swear an oath and take their folded ballots to the altar beneath Michelangelo’s Last Judgment. The result of this vote will furnish them with a snapshot of who the major contenders for the Petrine office are, who has real momentum—and who does not. Afterward, they will retire to St. Martha’s House, the Vatican hotel inside the closed city state, for some serious talk and perhaps a bit of arm twisting. Over meals and private chats some will attempt to persuade their brethren to throw his support to this or that candidate in the hopes of effecting the final ballots the next day. A cardinal told me on Sunday that this process is usually a “gentle sell” that can get harder as time goes on.

The unique dynamics of the conclave are something to bear in mind. These Cardinals will be sequestered from the rest of the world, cut off from staff and technology, forced to confront each other and themselves—all of them fixated on one purpose: the election of a pope. The closed nature of the process, the prayer and the solemn ritual involved to cast each vote will no doubt have an effect on the electors. Emotions will rise, fears and hopes will bubble to the surface, personality differences will intensify. The choreographed coming and going, the prolonged silences, the weight of their decision will create a psychological atmosphere hard for outsiders to comprehend. Father Roger Landry reminded me the other day that John Paul II wrote a book during a conclave (and took the manuscript out of the Sistine Chapel with him). The interesting thing is Blessed John Paul’s revised law on conclaves orders that any notes a cardinal writes in the Sistina must be destroyed. Though a veteran elector tells me he still has his notes from the last conclave in 2005. So I guess manuscript writing is not strictly prohibited. Given the uncertain nature of this particular election, which could stretch on for days, we might see a lot of cardinalatial manuscripts post-conclave.

There are three names that keep turning up like afternoon monsoons here in the Eternal City: +Scola, +Oullet, +O’Malley. The word is that Cardinal Angelo Scola will be the compromise candidate-- a man who could galvanize the Italians, draw a chunk of American votes and perhaps rally his fellow Europeans. They say he might be able to reorient the curia. But Cardinals from everywhere but Italy have their doubts.

Around town, every other Italian, from taxi drivers to baristas utter but one name for Pope: +Dolan. They love his ebullient charm and unbridled joy. There is said to be a conservative Roman block of 9 votes committed to Dolan. If elected he could easily take the name, John the XXIV without missing a beat. Still Cardinal Dolan’s election strikes me as remote after talking with several electors from various countries. And when you’re the Pope of "the Center of the Universe," why bother with the inconveniences of Italy?

The great hope of the Vatican bureaucrats is said to be Cardinal Odilio Scherer of Brazil. Of German heritage, Scherer grew up in Brazil but he is a Roman at heart. He spent seven years at the Vatican’s Congregation for Bishops. So it is no surprise that the curial types would back his candidacy.
If it is a reformer the Cardinals want--and it seems it is a reformer that they want-- the allure of the North American work ethic and can-do efficiency might prove hard to resist. The Latin contingent are said to be cold to the Dolan boomlet but could easily embrace Cardinal Sean O’Malley or Ouellet, with whom they have great relations and mutual affection. Cardinal Sean spent years in the Hispanic outreach in Washington DC, founded the Latino paper there and speaks fluent Spanish. Ditto for Cardinal Ouellet who has taught in Columbia for nearly a decade before becoming Archbishop of Quebec and later head of the Vatican’s Congregation for Bishops. He is someone who would be able to diagnose the problem in the curia, and given his track record at the Congregation, get things done. Remarkably the Latin Americans only have 14 votes in the conclave even though they represent 46% of Catholics worldwide. They want the Holy See to give Latin America it's due and a Pope who really cares. The Latin swing vote could be decisive.

The wild card tomorrow is the rain. Horrible thunderstorms are predicted to assail Rome for days. That’ll make the twice daily smoke stack gazing a real blast. Thank goodness John Paul added the ringing of St. Peter’s bells to confirm a new Pope or we’d gazing at that soggy chimney stack for hours without a clear answer. You folks at home may end up having the best seats to this Conclave after all. Then again you have no access to the pasta and vino. What’s a little rain with eats like this…

Be sure to tune in each afternoon for “Live from Vatican with Raymond Arroyo.” Our special coverage of the Procession of the Cardinals into the Conclave begins at 11AM eastern time and reairs at 10PM eastern on EWTN. We’ll also cover the first smoke signals in the afternoon. Remember to send your reactions or questions to Raymond@raymondarroyo.com. You can also sign up for my e-blast (it’s near the bottom of my homepage at Raymondarroyo.com). If you sign up for the e-blast, I’ll send you the latest installment of my Rome Diary each day. Ciao
Posted by Raymond Arroyo at 5:45 PM